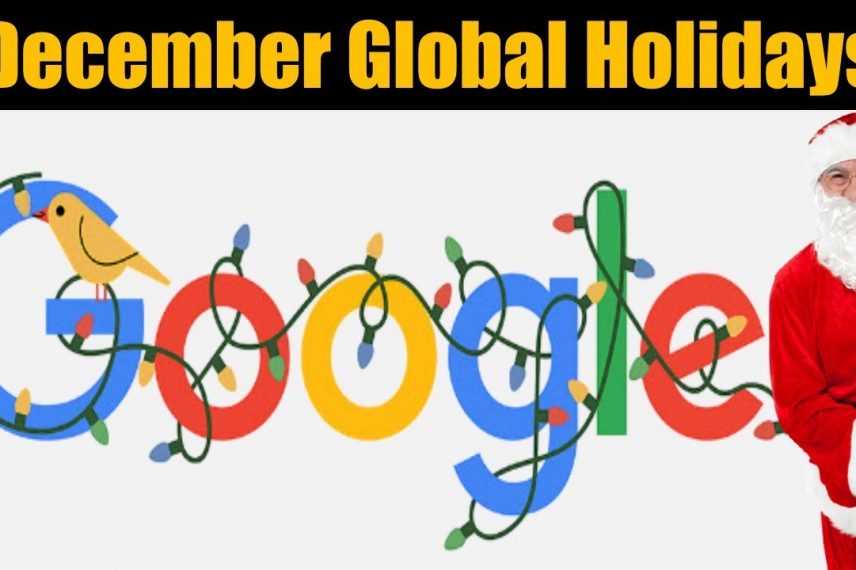 December global holidays: this is the name of the Google doodle which on December 1st is dedicated to the holidays of the last month of the year all over the world. A little bird wraps the logo on the first page of the search engine with Christmas lights and reminds us that the most awaited period of the year has just begun.

December global holidays: the doodle dedicated by Google to the December holidays around the world.

These are the most famous December global holidays in the world. But each country also has its own traditions and particularities.

Christmas around the world

Country you go tradition you find. Even at Christmas. In Germany, for example, the Christmas holidays begin with the feast of St. Nicholas on December 6, when Nikolaus brings chocolate and small gifts to the children, waiting for the real gift brought by Santa Claus. In some areas of France, however, adults do not exchange gifts on Christmas Day but on New Year’s Day. This rule does not apply to the little ones.

They are also eagerly awaiting Christmas in England, where children hang their stockings on the fireplace on December 24 to receive gifts, leaving milk, cookies and a carrot for Santa Claus and his reindeer Rudolph. Christmas in the heat, on the other hand, on the other side of the world, in Australia, where it is celebrated on the beach; while in Africa, tradition has it that the doors of the house are left open to allow anyone to enter and participate in the party. The Natal Luz folklore festival is the most anticipated event in Brazil, while in China the traditional tree is set up not with the classic balls but with lights and lanterns.

Beyond the Christian tradition

Not just Christmas. December global holidays also include the holidays of the last month of the year that have little or nothing to do with Christian Christmas. From 10 to 18 December (the date changes from year to year) the Jews celebrate Hanukkah, the festival of light or enlightenment. On 21 December in Iran, we celebrate the night of Yalda, the longest night of the year that coincides with the winter solstice.

On the same day, the Dongzhi Festival is celebrated in China, while the ancient indigenous Hopi and Zuni people celebrate the arrival of winter with the traditional Soyal. The Tibetan New Year, on the other hand, begins 15 days before the eve.

Omisoka is a Japenese festival celebrated on the last day of the year. Traditionally, it falls on the final day of the 12th lunar month. Since Japan switched to using the Gregorian calendar at the start of the Meiji era, Omisoka is now celebrated on 31st December (New Year’s Eve).

On this day, people indulge in various activities like cleaning, repaying debts, and purification, in a belief of driving out evil spirits and bad luck and to begin their new year with purity. On the 11th hour before the New Year when people are busy celebrating and planning bizarre new year resolutions. People usually gather for one last time in the old year to have a bowl of toshikoshi soba or udon (a tradition based on eating long noodles with “crossing over from one year to the next”).

So, who’s up for a ramen challenge on New Year’s Eve?